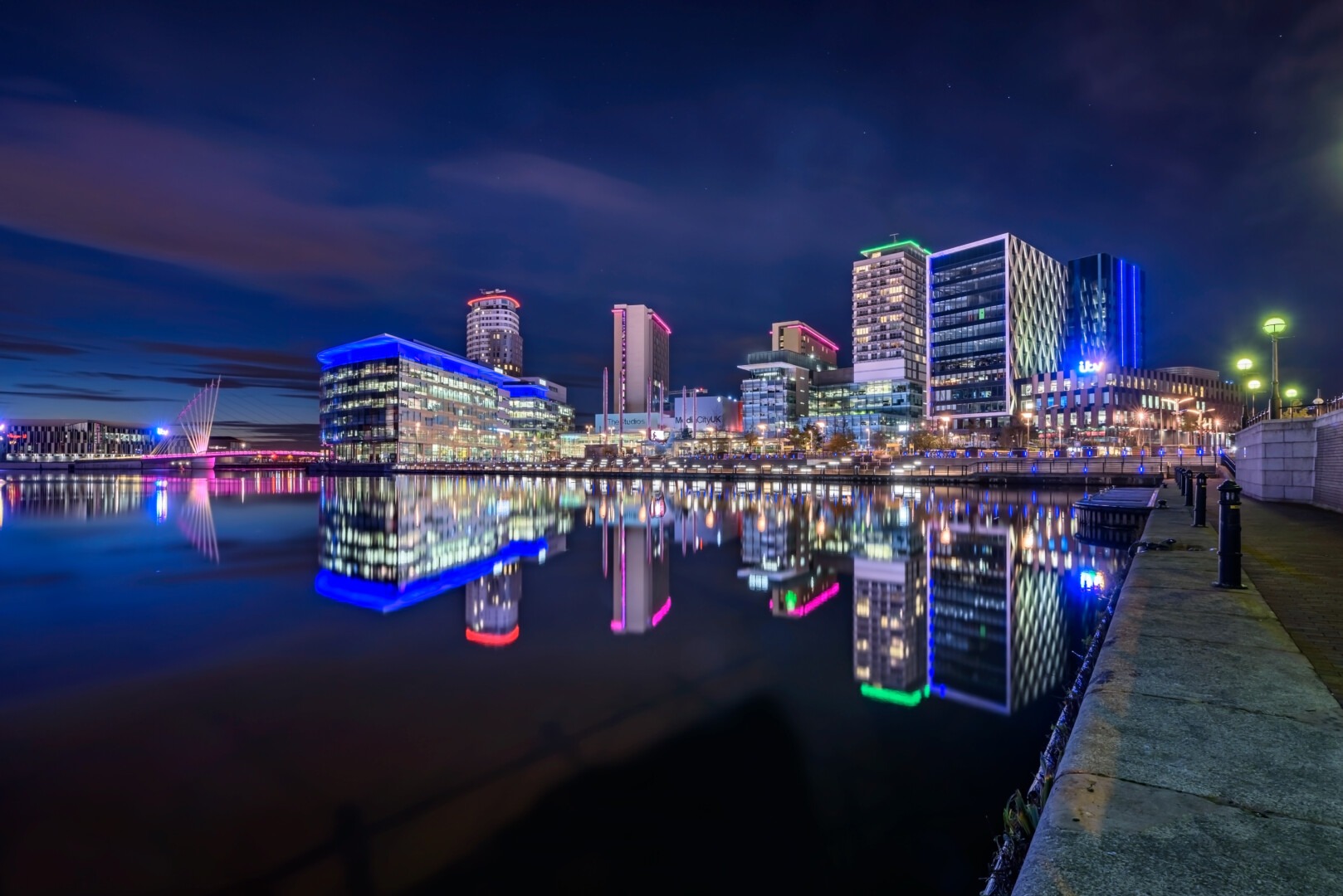 Since the launch of the Northern Powerhouse initiative, Manchester is recognised as one of the UK’s top urban regeneration hotspots. Now with over 20 years of regeneration, the face of the city has changed beyond recognition. Major developments, including the £1.5 billion Spinningfields project, the £800 million NOMA project and MediaCityUK, are examples of how the city has transformed.

Spinningfields has transformed into the city’s central business district, with residents including Deloitte, PWC and HSBC. The £1.5 billion project is now the leading regional business quarter in the UK and has an increasing visitor population of over 5.5 million people a year. With continual growth of the scheme, there will be around 20,000 people employed in the area.

The NOMA project is one of Manchester’s most sizable regeneration projects, spanning 20 acres and involves the creation of four million square feet of offices, homes, shops and leisure amenities. This masterplan has generated £380m towards the local economy and is now a flourishing mixed-use Quarter connecting Manchester’s city centre to the Northern Gateway.

MediaCityUK, located in Salford Quays, is the most significant media development in UK with over 250 media, creative and digital businesses. This positions Manchester as the second largest creative and digital hub in Europe. Some of the biggest names include the BBC, ITV, and Kellogg’s.

Reinvigorating spaces in this way has significantly grown the appeal of Manchester city, producing an excellent quality of life for residents and stimulating growth in the regional economy.

Greater Manchester’s GVA is worth around £62.8 billion and is the most economically diverse city region economy in the UK, with operating costs running 40% lower than in London.

The city’s dramatically rising population is a major contributor to Manchester’s thriving economy. From 2008-2018, the city’s population increased from 10,000 to 70,000 people, and from a wider region outlook, the Office for National Statistics indicated Greater Manchester’s population topped 2.8 million – a faster rate of growth than the national average. The city also has an overwhelming pool of graduate talent, with over 100,000 students studying at one of the five universities in the area. Research indicates 60% of graduates remain living in the North West region to start their career, with many working in the city’s thriving digital and technology sector.

With the vast amount of regeneration and the city’s thriving economy, it’s no surprise rental demand within the city is booming – particularly for well managed high-specification apartments in the private rented sector.

This popularity and appeal for Manchester has been reflected in the rate of growth in house prices. For example, in Zoopla’s latest House Price Index, data reveals the North West leads the way with house prices – increasing by 5.5% (compared to London which only saw half the amount of growth). On a city level, Liverpool and Manchester topped the list, with growth prices of 6.8% and 6.3% respectively. Aligned with this, Rightmove revealed the North West saw the highest surge in asking prices in 2020, with a 10.6% annual increase. These figures highlight Manchester’s attractive market conditions and also sheds light on the impact of Covid-19 on the property market. The successive lockdowns and changing working patterns have increased the desire for properties with additional space, inside and out, and has become a ‘must-have’ feature. This has led to a mass exodus of London and has increased the desire for bigger properties at lower price points – illuminating why the North West is seeing such an acceleration of growth.

Looking forward, data from JLL reports Manchester is expected to generate the highest growth in sales price (17.1%) and rental price (16.5%) over the next 5 years. It’s clear Manchester has a vision for the future, and with predictions like these, we are extremely confident this region will remain dominant in the property investment landscape and continue in the foreseeable future.

As the city flourishes, investments in new developments in Manchester is the logical choice. We have a number of luxury units in Manchester, below market value, making these opportunities a highly attractive prospect for private investors.

Wardour Point is a striking residential development in the heart of Manchester, exceeding all living expectations. Comprised of one-three-bedroom apartments and spacious duplex apartments and being surrounded by landscaped gardens with seating and social space, the development is perfect for residents to live, work and play.

Albion Place is a handsome refurbishment comprised of 72 one- and two-bedroom units, designed in an open plan setting with ample natural lighting through wall-to-wall windows. Located on the corner of Christopher and Windsor Street, the development is centrally located in Salford, which has seen significant amount of regeneration, bringing forward new homes, office space, and leisure facilities.